If you are looking for a WICKED good time this weekend, you will find it at the Adrienne Arsht Center in Miami. This Grammy Award-Winning Cast Recording stars Carrie St. Louis and Alyssa Fox as Elphaba belting out some of the best songs in the new Broadway era.

As a prequel to the Wizard of Oz, WICKED plays out the story of how the Wicked Witch of the West and Glinda came to be. The role of Glinda (Carrie St. Louis) was perfectly played as a perky and persistent sorcerer in training that was bubblier than a bottle of champagne. Her quit-witted lines, misplay on vocabulary, and her dreamy love for Fiyero provided great comedy for the show.

Some of the most amazing costumes and choreography were shown off in this show. The intricate design and imagination put into the set alone was amazing. The most powerful scene of the show came at the conclusion of Act I where Elphaba ascends into the sky leaving the life she has known behind. The vocals and energy in “Defying Gravity” sent chills up your arms as the entire cast joined in with curtain falling.

I would recommend this show for all families with pre-teens including grandma and grandpa. The smaller children may enjoy the show as much as The Wizard of Oz and could possibly be spooked by some of the amazing effects – and flying monkeys! This show will have you saying “Oh My Oz!” for weeks to come!

WICKED is playing at the Adrienne Arsht Center in Miami through Sunday, March 29. Click HERE to purchase tickets! 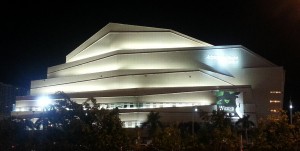