Most business staff work a weekly Monday to Friday schedule, sometimes known as the ‘nine-to-five grind.’ But when these employees clock out at 4:59pm and continue on to the weekend with their own personal business to attend to, the brand shouldn’t go with them too.

So many times I have reached out to a brand via social media either at night or over the weekend only to receive a response first thing at 9am the next business day – sometimes even days or even a month later! When people reach out to brands like I do, it’s usually for a live, in-the-moment matter. The longer the response time, the less effective the response becomes. 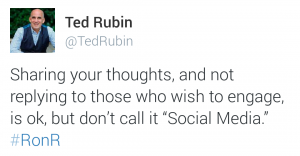 In almost five years of working for County Line, there has only been four days that I haven’t had my work phone with me to be available for any work-related matters that may need my immediate attention. I’m constantly accessible, whether it be in the waiting room with my mom for her surgery in Rhode Island or laying on the beach in the Dominican – I can be available.

A study completed by TrackMaven earlier in 2014 analyzed over 4,000 blog posts to measure its reach and activity based on the time of its posting. The research showed that while most posts were made during work hours, the majority of social activity and engagement took place on the weekend – Saturday being the strongest day of the week. Furthermore, the study also showed that posts published between 9:00pm and midnight had the most shares.

Some major brands have great social teams that work around the clock – JetBlue is my favorite; others just don’t get it.

Honestly, how complicated would it be for a major brand to assign a member or two of its social team to interact with consumers outside of the normal business hours? It truly baffles me. It’s not much different than having a team member on call like in many industries – this type may have to be more interactive than most, yet it can be done in an alternative location to the regular office.

The evolution of technology has allowed us to work more efficiently with such tools as accessibility to high-speed internet access, cloud hosting for large data, international communication abilities and so much more. The technology is there so why aren’t big brands using it to better build relationships with its consumers on a social level. Socializing doesn’t cease after hours, it continues and sometimes even increases.

Chances are the staff members working in the brand’s social media department are engaging in their own personal social media after hours. So while they are posting bikini selfies on a Saturday afternoon to their personal Instagram, would it be that difficult for them to check up on the work account and tweet back to a few folks? As long as pina coladas and margaritas aren’t involved, I don’t see the problem. They are already trained staff within your organization entrusting them to the company social feed during the week– now it’s during different and more engaged hours.

While the exact numbers may be difficult to determine, I’m confident the cost of additional work hours will only be a fraction of the return in its customer satisfaction.

When a major brand incorporates a social strategy with the goals of maximizing consumer loyalty, engagement or even increase sales, it needs to be a round the clock operation. The social world never sleeps, its doors never close and its operation never shuts down.

Being social requires a constant conversation in a timely manner in order for it to be effective. Believe it or not, the world does continue to operate even when you’re not paying attention; ESPECIALLY when you’re looking the other way. While I am most surprised at the larger named brands not capitalizing on the moments, this sort of conversation can also be targeted towards most businesses. Big or small, don’t miss out on the conversation – even if it’s in you PJs.