I first saw Phantom when I was no more than 6 or 7 years old in Boston, and it was thrilling! Even scarier that my parents’ room had the same mirror from which he takes Christine to the “dungeons of [his] black despair!”  I’ve seen it 6 times between Boston, Providence, Broward Center, and now Miami.  It’s by far, one of the best. 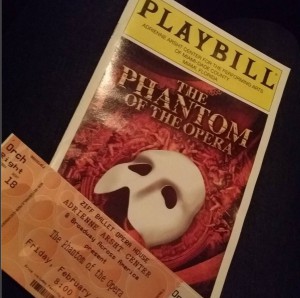 Thirty years ago, Andrew Lloyd Weber gifted the theater world with his original score of Phantom of the Opera. Now in Miami, Cameron Mackintosh has brought the Phantom back as one of Broadway’s largest productions on tour.

The cast seemed to be much younger than any cast I have ever seen, but their performance showed that they were nothing but professional and experienced.

Chris Mann gives The Phantom a more contemporary sounds and commands the stage with his presence. (If you watch The Voice then you’d know him!) Katie Travis magnificently captured both strong and soft sides of Christine Daee and hit her highest octave with perfection. Other standout performances in the show included Meg, Monsieur, Firmin and Monsieur Andre.

In this production, it is very evident that both directors of lighting and costumes are Tony Award® winners. The famous Masquerade scene was incredible – the colors, the ruffles, the various masks. The gowns on the women flowed so gracefully across the stage and the stage came live with the vocals.

Anyone who has seen Phantom anticipates the dramatic drop of the chandelier – and that it most certainly was! Pyrotechnics, lighting and sound effects were in abundance throughout the performance and added to the show’s authenticity.

Being the Broadway junkie that I am – especially the classics – I’m a tough critic! Phantom and Les Mis are my favorites of all. None compare.  However, I was truly impressed with how this production kept the traditional opera yet still had a different flair than any other I’ve seen.