It’s no surprise why this performance is back by demand since its sold-out run in 2012.

Award-winning magician Dennis Watkins takes on the role of the legendary Harry Houdini in full form. Performing with The House Theatre of Chicago, Watkins performs some of Houdini’s original tricks, including his most dangerous escape from the Water Torture Cell. 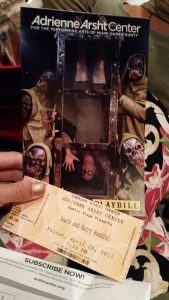 The eight-person cast was spectacular with their multiple talents of singing, dancing, theatrics and of course – MAGIC! It was impressive to see them immerse themselves into multiple roles without missing a beat.

The set up for the show in the Carnival Studio Theater is extremely intimate with about 100 people in total split in two with the stage in the middle. You are truly part of the show! 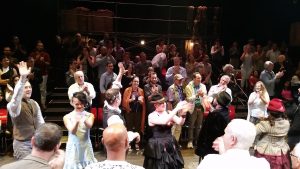 There was plenty of skeptics in the crowd but even they walked away amazed at some of the mind-blowing performances of Houdini.

The show contains two Acts that run approximately an hour each. Drinks and minimal snacks are available for purchase.

Death and Harry Houdini runs April 26 through May 21 at the Carnival Studio Theater at the Adrienne Arsht Center. Don’t miss your chance to be amazed!

The best way to enter the theater is from Biscayne Blvd in between 13th and 14th street. I like to park a couple blocks west on 13th street. There’s plenty of street parking you can use with your parking app. Four hours only cost me $6.  From there you can catch an Uber to any of the places downtown Miami, maybe even Wynwood. Enjoy! 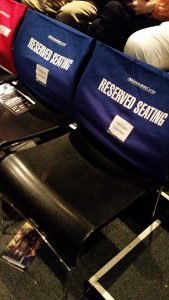